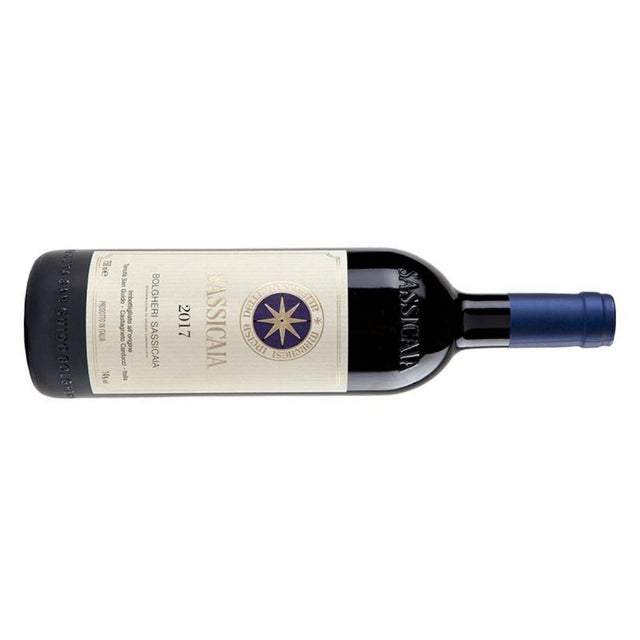 Add to Cart
The only wine from a single estate in Italy to enjoy the privilege of having been granted a DOC of its own (Bolgheri Sassicaia DOC), it’s truly a Tuscany gem.  Sassicaia wasn’t the first super Tuscan per se but Marchese Mario Incisa della Rocchetta was indeed the one who sowed the seeds of the Super Tuscan movement by choosing to import the so called Bordeaux varietals (Cabernet Sauvignon, Cabernet Franc) to plant in his vineyard in Bolgheri instead of the native Tuscan, Sangiovese. The wine, initially planted for just personal consumption (and it remained as much for over two decades), over the period of time became so good that it when it finally hit the market around the late 1960s, it was an instant sensation. An equal credit goes to the fortuitous coming together of Marchese Mario Incisa with the oenologist Giacomo Tachis. Giacomo Tachis was awarded Decanter Man of the year in 2011.

​Tachis joined Antinori’s San Casciano winery in Tuscany in 1961 as a junior oenologist, rose to technical director, and in 1968, in a move which was to cement his reputation as an innovator, he lent his services to the Bolgheri estate of San Guido to help in the creation of a new wine – Sassicaia.
​
Tasting Notes and Reviews
"Aromas of exotic spice, baked plum and French oak mingle with camphor and blue flower on the nose. This boasts extraordinary elegance and freshness despite the hot vintage, delivering flavors of juicy Marasca cherry, spiced blueberry, tobacco and licorice. Velvety, fine-grained tannins provide support while coffee and crushed mint linger on the finish. Drink 2022–2032." 97/100 Wine Enthusiast, Kerrin O Keefe, Jan 2020

"The balance and beauty to this is impressive, offering sweet, ripe currants and flowers with some crushed-stone and dry-earth undertones. Full-bodied with soft, polished tannins and a long, creamy-textured finish. It’s polished, yet concentrated. Better after 2022, but already very seductive." 96/100 James Suckling, Dec 2020.

"The 2017 Sassicaia shows the natural richness and intensity of the year while retaining its mid-weight sense of balance and overall poise. A burst of super-ripe red cherry/plum fruit makes a strong opening statement. Mocha, cinnamon, leather and dried herbs appear later, adding aromatic lift. The 2017 is a fairly immediate Sassicaia. Even so, it has enough energy to drink well for a number of years. Production is down 35%, a combination of naturally low yields, dehydration on the vine and then selection in the cellar. Most of the fruit comes from the estate’ hillside vineyards, older parcels that resisted the conditions better." 94/100 Antonio Galloni/Vinous, Jan 2021