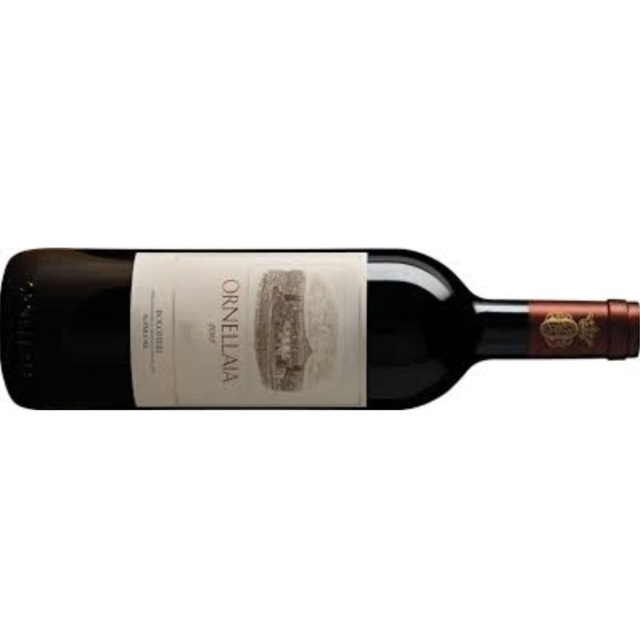 While Marchese Lodovico Antinori, brother of the current heir of the Antinori Estate was the visionary behind Ornellaia with André Tchelistcheff as winemaking consultant, over the years, the fortuitous coming together of the famous Frescobaldi family along with the marketing genius of Robert Mondavi, the experience of Michel Rolland and the wine making finesse of Axel Heinz has truly shaped this wine.

While the first vintage of this wine which was soon to achieve worldwide acclaim was in 1985, it didn't take the wine very long to establish it's fan following. Ornellaia's 1998 vintage was named wine of the year by Wine Spectator in 2001.

2013 Vintage
After a dry 2012, winter 2013 was characterised by mild but very rainy weather, which caused a delay in budding of up to 15 days. The cold and rain also led to irregular and very long flowering – with a two-week delay compared to the average – which reduced production and resulted in uncoordinated development of clusters. Fortunately the summer, which arrived punctually at the end of June, was perfect, dry and sunny, but with a few peaks of intense heat in July and August. The slow vegetative development was ultimately beneficial because it deferred ripening until after the hottest period. The storms of August significantly lowered the temperatures, especially at night, which favoured aromatic expression, but led to a later than average harvest, between 9 September and 14 October, with mainly sunny weather without excessive heat.
​
Tasting Notes and Reviews
"What appeared to be a disadvantage for the 2013 vintage – late budding and flowering – proved to be a major advantage thanks to a warm summer and month of September offering textbook conditions for harvesting, with cool temperatures but a prevalence of sunny weather. This resulted in slow but complete ripening with great balance and a delightful aromatic quality, which we like to define as “Elegance”. Ornellaia 2013, with its dense, vibrant colour, has a nose of splendid aromatic complexity built around a limpid and brilliant fruitiness, underscored by refined spicy and balsamic notes. The mouth develops vibrant and complex fruity nuances framed by a dense, slender structure with tannins that attain a rare harmony between firmness and fleshiness, concluding with a long balanced and fresh finish.” Axel Heinz, Winemaker, Ornellaia – May 2015

"Amazing graphite and violet aromas with dark fruits. Medium to full body, ultra-velvety tannins and a long and beautiful finish. Formed and tight. I love the fresh ginger underneath it all. This has a cool profile to the wine. So approachable yet this has wonderful length." 98pts, James Suckling Nov 2016

"This is the vintage dubbed L'Eleganza by winemaker Axel Heinz. The word appears on the back label and there are some special bottlings with labels by the Japanese artist Yutaka Sone."
"Dark crimson with purple notes. Very ripe but with lively, savoury topnotes and lifted freshness. Great balance and approachability already.  Funny to think of how even the finest 2013 red bordeaux would taste alongside this luscious wine. Scented and savoury. Pure hedonism. Not sure 'elegant' is the word I'd choose in a global context, but maybe it is appropriate in an Ornellaia context.." 18.5/20,  JancisRobinson.com, Sep 2015

“The 2013 Ornellaia continues to put on weight with time in bottle. I have tasted the 2013 three times over the last few months and watched it blossom over that time. Fresh, vibrant and tightly wound, the 2013 is going to need at least a few years to come into its own. There is striking purity to the aromas and flavors, along with plenty of tension and enough energy to reward cellaring. “ 96+ Antonio Galloni, Nov 2016

“This wine will be released in May 2016. The 2013 Bolgheri Superiore Ornellaia is an integrated and seamless blend of Cabernet Sauvignon, Cabernet Franc, Merlot and Petit Verdot. Alex Heinz tells me that 2013 was a difficult vintage especially towards the early part of the growing season. It balanced out during the summer and allowed for steady ripening of fruit before the harvest. But 2013 was not as hot as 2011 and 2012 overall, and this edition of Ornellaia is beautifully tonic and shapely as a result. The bouquet is very developed in terms of aromas this year with beautiful notes of dark fruit, tobacco and spice. Those perfumes are just gorgeous. The mouthfeel is similarly intense with tannins that are still young, but are already silky and linear in nature. This vintage promises a long aging future. “ 96pts Monica Larner, Robertparker.com Oct 2015

"Vanilla, toast and smoke notes shade the black cherry and plum aromas, while the spicy oak theme carries over on the palate. A brash style that shows fine balance, but this will require time to find equilibrium. Cabernet Sauvignon, Merlot, Cabernet Franc and Petit Verdot. Best from 2018 through 2029." 93/100 Wine Spectator, Jun 2016

The Process
The crown jewel of Italian wines goes through a very severe selection process before and after harvest. During the harvest period analysis and empiric testing enables the estate to determine which grapes to pick and in which order. The tasting of the grapes allows them to better ascertain the ripeness of the tannins and the balance within the bunches in order to establish the optimum harvest time and the vinification technique for the grapes from each parcel of land. The estate then subjects each and every grape to a double selection process. On the first table the quality of the bunches is checked, while during a second control every single piece of vegetation is removed.

The diverse nature of the Estate’s soils – marine, alluvial and volcanic – coupled with this maritime climate create an environment in which red and white varietals can express themselves to the full. This myriad of individual parcels of vines fit into this unspoilt landscape like a mosaic, creating a unique expression of beauty and complexity in an exceptional place. While experience, skill and determination have all played their part in enhancing the quality and reputation of Ornellaia, it is the Estate itself that is continual source of inspiration, suggesting unique and exciting ways to capture its natural generosity.

The grapes from each vineyard ferment separately in individual tanks, in this way each individual base wine (of which there are more than 60) contributes its own character to creation of the final blend according to the specific conditions of the vineyard area from which it comes : a combination of soil type, climtic exposition, grapge variety. Only after a period of 12 months of ageing in French oak barrels will the base wines be selected and blended according to 2 principal criteria : the elegant expression required by Ornellaia and the character of vintage itself.