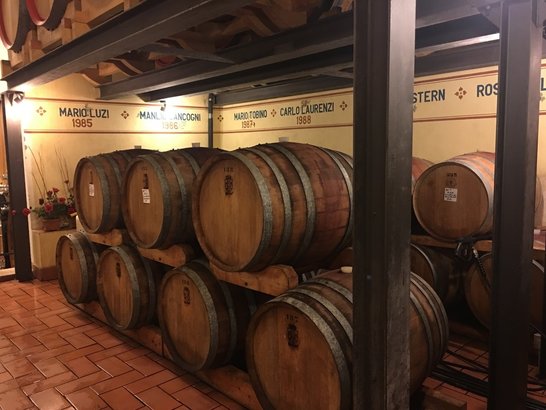 The Colombini were one of Siena’s noble families, active in the Sienese government since the beginning of the 1000. The first member to be quoted in the chronicles was Tignoso Colombino, after him his children were named Colombini and since then the family’s name remained. His residence was a castle in the village of Uopini, just outside Siena. The same castle became an hospital in the Middle Ages and it is still in existence.

In 1200 the family was allowed to have a Coat of Arms with the four little doves painted on a blue field and separated by a golden cross. With the years the cross disappeared, maybe because of a Crusade or, simply, to signify the compassionate attitude of the family.

​
Fattoria dei Barbi extends over 306 hectares (around 757 acres) at Montalcino and Scansano. Stefano Cinelli Colombini, heir of the ancient Sienese line that has been present in Montalcino since 1352, runs this family property.

The Cantina dei Barbi, with its 300 wooden wine barrels and thousands of bottles of Brunello laid down for aging, has been open to the public for more than fifty years. During this time more than a million and a half wine lovers have visited our cellars, admiring the collection of bottles that date from 1870 to the present day, bearing witness to a continuity that makes Barbi unique in Italy.

The Brunello produced by Fattoria dei Barbi has won prizes all over Europe since the late nineteenth century, and continues to vow and win wine lovers all over the world.

At the beginning o the XiX century the family lived in Carmignano near Lucca. They continued to maintain a strong relationship with Siena. For this reason Paolo Colombini, a law scholar, decided to become a Notary. He followed the Bishop of Lucca who moved to Montalcino, in order to manage also his minor agricultural properties located there. It was a lucky choice, starting a new chapter of the family history, which lasts till today. His son, Pio Colombini, was an Academic, a genial Professor in Medical Science who discovered a therapy to cure the syphilis. Despite his medical profession he wrote on his passport “landowner” and he produced the first bottles of Brunello. He married Elina Padelletti, from an ancient and noble family of Montalcino, who increased the possession with the villa Podernovi, where are located today the cellar and laboratories.

Their son Giovanni Colombini, born in 1906, was an innovator, a pioneer of the modern viticulture. The opening of the first Italian public wine shop in the Fortress of Montalcino, in 1936, was his idea. The same Fortress was restored during his years as Mayor of the city.

He was the one that started the first mail-order selling of Tuscan wines and also the first sales overseas in many markets. He was also innovative in the way of selling hundreds of thousands of bottles for a very high price, changing the future of a wine, from a restricted élite of consumers to a much wider category. It was the first firm in Montalcino to export bottled wine to France (1817), the first to sell Brunello by mail order (1832), the first to export it to America (1962), England (1969) and Japan (1975). It created the first “Super Tuscan” (Brusco dei Barbi, 1969) and the first single-varietal grappa (Grappa di Bruennlo, 1974). In the 1960s the estate was a pioneer in using organic fertilisers.

The opening of the Fattoria dei Barbi cellar to the visitors in the Fifties is one of the first step to the Wine Tourism. After the death of Giovanni Colombini in 1976, the Fattoria dei Barbi has been managed first by his daughter Francesca and afterwards by his nephew Stefano. They both developed and expanded the property, making it what is possible to see today. 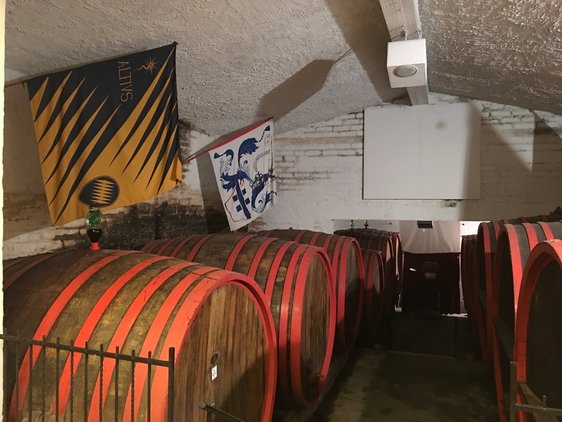 The Fattoria has always been a careful custodian of tradition, but is also attentive to innovation and has been a pioneer in every sphere of winemaking. In the 1990s it created the first “artificial nose” for analyzing wine, and in 2000 was one of the first to use carbon dioxide for cold fermentation of red wines.

The current annual production is about 800,000 bottles, of which more than 200,000 are Brunello. The 66 hectares of the farm have an average density of about 5,000 vines and produce on the average less than 1.5 kg of grapes per vine; thus each vine produces only a little more than one bottle of wine. The philosophy of the Colombini family and the Fattoria dei Barbi has always been to know and study the most innovative technology and then wed it to the best tradition, so as to improve everything they produce without ever changing its distinguishing characteristics.

The surface planted in grapevines covers 28 hectares. All its vineyards at Scansano are set up for irrigation, which enables them to bring the grapes to the perfect degree of ripeness. Theoretically, the farm can produce 84 hectoliters of Morellino di Scansano DOCG per hectare, although the firm has never been able to get more than 50 hectoliters per hectare, even taking advantage of irrigation. It's the firm's belief that the Maremma region can produce outstanding Sangiovese wines, but to attain this quality production has to be kept very low.

The regulations for making Morellino call for 85% of Sangiovese, locally called Morellino, and 15% of other varieties. Barbi has added 15% of Merlot grapes, which gives its Morellino di Scansano an intense bouquet and pleasing roundness, without altering its distinguishing characteristics. The vineyards are situated on a hill 250 meters above sea level, facing the Tyrrhenian Sea, a detail that contributes to a perfect microclimate, with warm sunny days and cool nights, thanks to the sea breezes.

​Morellino is ideal for well-seasoned meat dishes, roasts, the grilled wild boar meat typical of Mediterranean cooking, cured pork, and especially flavorful cheeses. This wine breaks the rules in its own way, since it is an excellent companion for fish soups and in general any type of fish cooked with spices and tomato sauce. In Italy, the major market is Tuscany, but consumption of Morellino is growing fast in other regions as well.