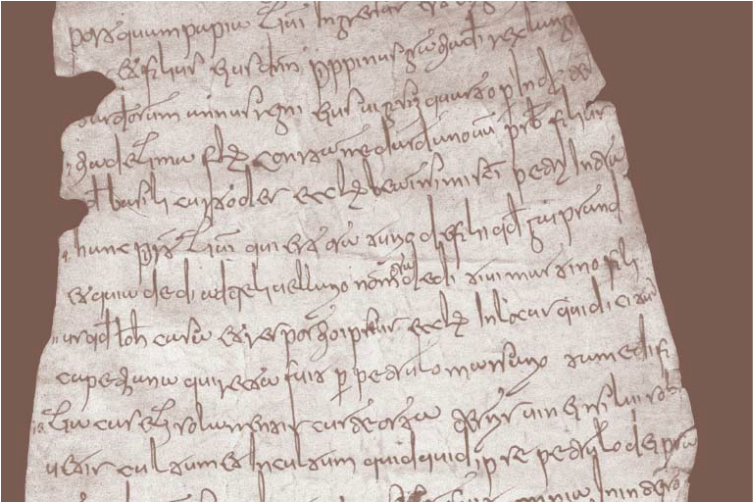 (The above picture is a parchment date 804 a.c. of a lease found in the archives of Florence that suggests vines and olives were being cultivated in Capezzana estate almost 1200 yrs ago.)
Tenuta di Capezzana

History of Wines in Carmignano is probably as old as the history of wine itself. Granted the DOC in 1975 followed by DOCG in 1990 (retroactive from 1988 vintage), the wine making goes back to the pre Roman era, about 3000 years ago (going by the wine artefacts that have been found in Etruscan tombs). Noted for the quality of its wines since the Middle Ages, Carmignano (in Tuscany) was identified by Cosimo III de' Medici, Grand Duke of Tuscany as one of the superior wine producing areas of Tuscany and granted special legal protections in 1716. In the 18th century, the producers of the Carmignano region developed a tradition of blending Sangiovese with Cabernet Sauvignon, long before the practice became popularized by the "Super Tuscan" movement of the late 20th century.

Capezzana, one of the main producers of Carmignano is an equally illustrious estate worthy of this unique legacy farming the land that has been in wine production for over 1200 years.

In the early Renaissance (1475), Monna Nera Bonaccorsi built the first 'Nobleman's house' and nine farm houses with the wine-making buildings. Other generations and families such as the Biscotti, related to Medicini, and the Marchesi Bourbon del Monte followed on the estate property. In the eighteenth century a married Biscotti Bourbon enlarged the farm and bought new farms bringing in new exemplary administrative methods. After the Bourbon del Monte, the company passed to the Adimari Morelli and then to Franchetti and Rothschild, the widow Sara de Rothschild, before arriving to the current proud owners, the family of Contini Bonacossi in 1920. The estate was then further extended with the purchase of two neighbouring farms "The Puoggetto" and "Trefiano" and thus, was born the estate of Capezzana as it is known today. The estate has been dedicated to cultivating high quality Wine and Olive oil and boasts an impressive collection of historic vintage dating back to 1925. In 1945 Augustus Alexander was joined by his son Ugo, a war veteran, who later went on to acquire a degree in agriculture. The estate gradually shifted from being a sharecropping entity when it started to a modern wine company managing all aspects of wine making. Various members of the Contini Bonacossi family are now involved in the day to day management of Capezzana.

The new generation follows in the footsteps of Count Ugo, the founding father of Carmignano DOCG.
The Award Winning Portfolio

Capezzana wines have always been well loved by its customers and critics alike regularly scoring in the nineties in tastings for most of their vintages across the portfolio. While we always encourage customers to try and enjoy the wines first and then form their own opinion, we do recognize most of us don’t have the luxury of time and money to spare to taste and sift through the hundreds of wines. To this end, scores, especially from some well-known wine critics & tasters such as the teams at Vinous Media, JancisRobinson.com and Wine Advocate do help considerably in wine selection. Another benchmark that we use, albeit very very selectively is how ‘decorated’ is the portfolio. While the presence of a large number of wine awards in the international domain means a considerable discount should be applied when judging wines by the wine awards, there are still a few that have managed to sustain the critical quality and rigor of wine selection. The main award that The Wine Monk team still relies on as a sign of quality is the International Wine Challenge (IWC) followed to a lesser extent but still reliable Decanter Wine Awards and The Sommelier awards. This, because the people behind these awards are the same people whose guidance, discerning palates and wine writing we so often rely on.

Over the last decade the wines from the Capezzana portfolio have continued to vow the audience and judges alike winning these awards across their blends and wine styles. While the current prices reflect the demand and significant investment made by the producers in upgrading their facilities and cellars, these super Tuscans are still extremely undervalued for the quality and history these bring to the table.

Please follow the enclosed link for more details on the wine awards and score of their portfolio http://www.capezzana.it/images/varie/premi-capezzana-ita-eng.pdf

To know more about this Carmignano icon, visit their website: http://www.capezzana.it/en/